Full Name
Irina Overman
University
Wright State University
Speaker Bio
Irina Overman MD, is the Director of the Foundations of Clinical Practice Curriculum, and Assistant Professor, Internal Medicine and Geriatrics at Wright State University Boonshoft School of Medicine since 2017. Prior to this role, she was the Clerkship Director for Internal Medicine since 2015 and has continued in this role to present date. She has worked in a teaching role with Departments of Internal Medicine or Geriatrics since 2012.
Dr. Overman received her medical degree from Wright State University Boonshoft School of Medicine in 2008 and completed her Internal Medicine Residency at Wright State in 2011. She completed a Chief Residency year in 2012. Her interests have been in residency and medical school education, as well as Geriatrics. After completion of her chief year, she pursued a fellowship in Geriatrics while continuing to teach in the Internal Medicine Residency program at Wright State.
Dr. Overman has been extensively involved with the innovations to our medical school curriculum as well as the residency curriculum. She introduced “flipped classroom” teaching into the noon conference and didactic schedule into the residency curriculum. She has been a member of the Wright Curriculum Steering Committee which has led the transformation to a new curriculum built upon the principles of effective learning and moving to a lecture-free curriculum. In her role as Director of Foundations she has been at the forefront of the implementation of the curriculum during the first two years of medical school, and due to her Clerkship Director responsibilities, she has been able to help implement similar changes into the Clerkship.
Dr. Overman serves on numerous school committees. Her recent awards include the Robert A. Davies Teaching Excellence Award in 2013 and again in 2017 from the Internal Medicine Residency. She is Board Certified in Internal Medicine since 2012 and in Geriatrics since 2016.
Speaking At
Going Lecture Free for Gen Z 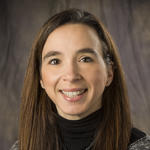